Urbino
Who will build the best districts in town?

Players together develop the town of Urbino. The player who has built the most vibrant and most valuable districts by the end of the game wins.

The gameboard starts out empty. Each player chooses one color and takes the 27 buildings of that color (18 houses, 6 palaces, and 3 towers) plus one architect figure.

Each turn (except for the first) consists of two consecutive actions:

The active player may leave the two architects in place or choose one of the two figures and place it on a different unoccupied square on the gameboard. After that, it must be possible to erect a building in any case. If this is not possible, the architects have to stay put and the player has to skip a round.

The active player chooses a building from his supply (a house, a palace, or a tower) and places it on one of the squares.

Where a building can be erected depends on:

2.1. The positions of the architects

From his space, each architect “looks” straight across any number of squares in a horizontal, vertical, and diagonal direction. He cannot look over occupied squares.

When two architects are standing on the gameboard, in most cases their “lines of vision” intersect on certain squares. This is where buildings can be erected under specific conditions.

If the two architects are standing in one line, with no building between them, all the squares between them (without regard to other directions) are considered intersection points.

Each district may consist of no more than two blocks – one per player! That means, when erecting a building, a player has to ensure that all buildings of the same color within a district always remain connected. Buildings that are positioned diagonally to each other are not connected. See illustrations 3a and 3b below.

A tower may never be located horizontally or vertically adjacent to another tower (no matter of what color). The same applies to palaces: They may not stand directly next to one another. The small houses have no restrictions in this respect.

If the active player has no possibility at all of erecting a building, he has to skip that round. This can happen if he has no suitable building left or cannot reposition any of the two architects to make building possible. Skipping voluntarily is not allowed. A player who has had to skip a round might be able to resume play in one of the next rounds, provided new building possibilities come up for him.

End of the game and scoring

The game ends as soon as the two players in a row have to skip a round. When that happens, the scoring takes place. Only those districts are scored that contain buildings of both players. One-color districts or stand-alone buildings score no points. For the “vibrant” (i.e., two-colored) districts, only the player who has contributed the higher total building value gets the corresponding victory points; the other player’s building values go to waste.

The building values are:

In case of a tie, the player who has placed the more valuable buildings gets the points. To determine this, the players compare the number of – in this order – towers, palaces, and then houses. If this doesn’t resolve the tie, neither player gets victory points.

When all districts have been evaluated, the player with the highest total score wins the game. In case of a tie, here, too, the more valuable buildings that have been scored prevail. A game can also end in a draw. 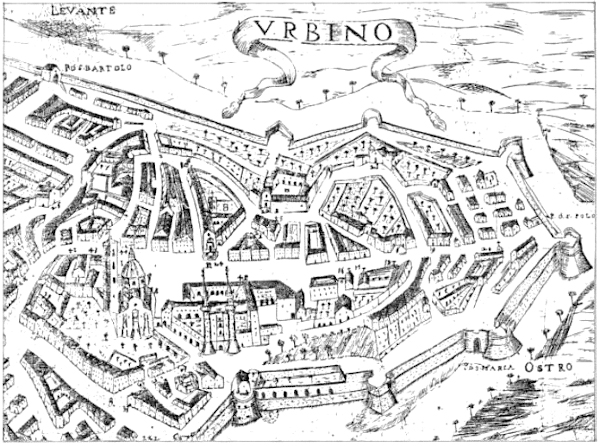